Parkinson’s disease is an incurable, progressive brain disorder estimated to affect over seven million patients worldwide. It is caused by the degeneration of dopamine-producing neurons in the brain. The underlying reasons that trigger degeneration of dopamine-producing neurons in Parkinson’s disease remain poorly understood. However, the symptoms are a consequence of reduced brain levels of dopamine, a neurotransmitter in the brain. The typical motor symptoms include tremor, slowness of movement, muscle stiffness and impaired balance. Also various non-motor symptoms, including problems with cognition, sleep and speech, depression, and severe constipation, may occur. As the disease progresses symptoms worsen and become debilitating.

Available treatments for Parkinson’s disease do not cure the disease or even slow down its progression because the pathological processes resulting in degeneration and death of dopamine-producing neurons are not affected. Current standard-of-care treatments are pharmaceuticals, such as L-dopa, that increase dopamine levels in the brain. The efficacy of the L-dopa is typically gradually lost with disease progression as an increasing amount of the dopamine-producing neurons have degenerated.

Estimated and Projected Number of Individuals with Parkinson’s Disease, 1990-2040 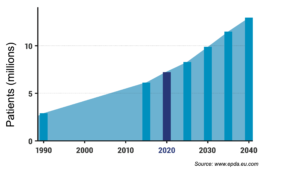 Parkinson’s disease is associated with a significant societal economic burden in addition to the immense human suffering. The majority of costs are not linked to treatments but, for instance, the loss of productive years and the increased need for supported living arrangements for disabled patients. In 2010 the societal costs of Parkinson’s disease in Europe alone totaled approximately EUR 14 billion. The household costs per patient per year are estimated to be EUR 20,000.*