Many degenerative central nervous system (CNS) diseases are characterized by acute or chronic cellular stress, disruption of proteostasis and death of neurons. In healthy cells, the cellular proteome is maintained in balance, but in some CNS diseases disruption of proteostasis results in the accumulation of misfolded, dysfunctional and toxic forms of specific proteins. Parkinson’s disease is a progressive and incurable brain disorder characterized by the accumulation of aggregating and toxic forms of alpha-synuclein protein in the brain. Currently available therapies only alleviate symptoms rather than deter the development of the disease itself. As a novel drug candidate, recombinant human CDNF (rhCDNF, referred to as CDNF) has the potential to stop the progression of Parkinson’s disease by supporting the maintenance of proteostasis, protecting neurons from degeneration and restoring the functions of already damaged neurons. A Phase 1-2 randomized, placebo-controlled, double-blind, multicenter clinical study to assess safety and tolerability of intraputaminally infused CDNF  for the treatment of Parkinson’s disease was conducted at three university hospitals in Sweden and Finland. The 12-month treatment period was completed and is now being followed by a 1-year observation period.

CDNF is a protein naturally present in humans. It was discovered by Professor Mart Saarma’s laboratory at the University of Helsinki and published in the leading scientific journal, Nature, in 2007. Based on this discovery, Herantis has secured worldwide patents for rhCDNF and launched a drug development program. The research and development efforts have confirmed that CDNF is a promising neuroprotective and neurorestorative drug candidate, which functions via several mechanisms relevant to neurodegenerative diseases, including Parkinson’s disease. It protects neurons from degeneration, promotes proteostasis and restores the function of already degenerating neurons. This suggests that CDNF has the potential to stop the progression of Parkinson’s disease, which would have a significant therapeutic impact on the lives of patients. If successful, CDNF therapy would enable Parkinson’s patients to improve their quality of life.

CDNF has a multi-modal mechanism by which it improves neuronal survival in Parkinson’s disease and other neurodegenerative diseases. A common feature with many neurodegenerative diseases is the disruption of proteostasis in the brain, resulting in a vicious cycle of pathological accumulation of protein aggregates, neuroinflammation and various forms of cellular stress. Eventually, this results in a gradual loss of neuronal connections and progressive neuronal cell death. 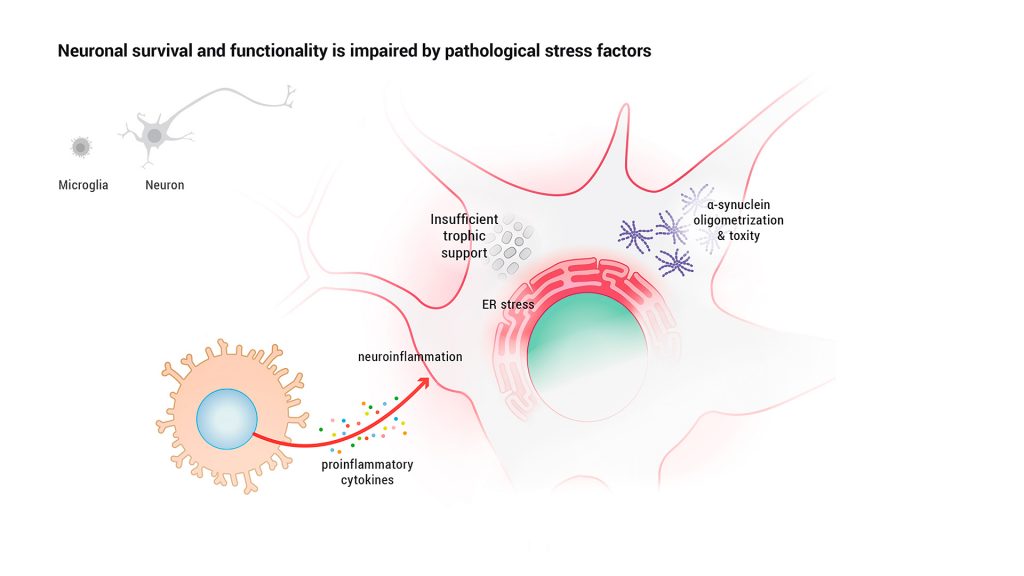 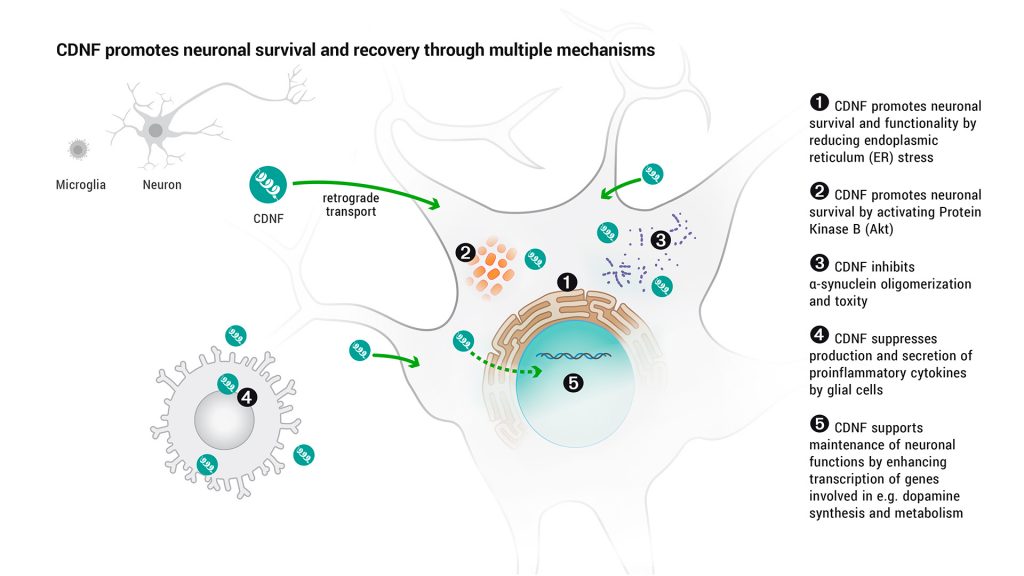 A Phase 1-2 randomized, placebo-controlled, double-blind, multicenter clinical study assessed safety and tolerability of intracranial CDNF infusions for the treatment of Parkinson’s disease was completed in Q3 2020. A follow-up study of the subjects is on-going. This clinical program was partially financed by the European Union (more details at www.treater.eu).

As a protein, CDNF has limited access from the blood to the brain due to the blood-brain barrier (BBB). Therefore, in the Phase 1-2 clinical study, CDNF was administered using a brain-implanted drug delivery device that directly targets the putamen, a specific nucleus in the brain that is affected in Parkinson’s disease. However, this route of administration does not allow treatment of early-stage Parkinson’s patients, which would be the optimal patient population for a neurorestorative treatment aiming to rejuvenate the remaining dopamine neurons. In later stages of disease, there are less surviving dopamine neurons left to rescue which may reduce the efficacy of treatments like CDNF. Herantis is currently exploring other less invasive, more patient-friendly ways to deliver CDNF to patients. This includes certain parenteral routes and intranasal administration.

In addition to Parkinson’s disease, CDNF has shown potent neuroprotective and neurorestorative effects in preclinical models of several other neurodegenerative conditions. Herantis is exploring other indications both in acute and chronic neurodegeneration.

Parkinson’s disease is an incurable, progressive brain disorder estimated to affect over seven million patients worldwide. It is caused by the degeneration of dopamine-producing neurons in the brain. The underlying reasons that trigger degeneration of dopamine neurons in Parkinson’s disease remain poorly understood. However, the symptoms are a consequence of reduced brain levels of dopamine, a neurotransmitter, in the brain. The typical symptoms include tremor, slowness of movement, muscle stiffness and impaired balance. As the disease progresses symptoms get worse, and also various non-motor symptoms, including problems with cognition, sleep and speech, depression, and severe constipation, may occur.

Available treatments for Parkinson’s disease do not cure the disease or even slow down its progression because the pathological processes resulting in degeneration and death of dopamine neurons are not affected. Current standard-of-care treatments are drugs, such as L-dopa, that increase dopamine levels in the brain. The efficacy of the L-dopa is typically gradually lost with disease progression as an increasing amount of the dopamine-producing neurons have degenerated.

Parkinson’s disease is associated with a significant societal economic burden in addition to the immense human suffering. The majority of costs are not linked to treatments but, for instance, the loss of productive years and the increased need for supported living arrangements for disabled patients. In 2010 the societal costs of Parkinson’s disease in Europe alone totaled approximately EUR 14 billion. A study in the USA suggested that a treatment, which could stop the progression of Parkinson’s disease would save society about EUR 400,000 per patient. This is Herantis’ goal with CDNF.

CDNF has shown preclinical activity also in other neurodegenerative diseases

CDNF affects cellular mechanisms that are involved in pathophysiology of a variety of central nervous system diseases. Particularly, endoplasmic reticulum stress, unfolded protein response and neuroinflammation are involved in many chronic neurodegenerative diseases. Preclinical data suggests that CDNF has therapeutic potential in a variety of neurodegenerative diseases in addition to Parkinson’s disease. It is possible that CDNF could be used as a basis of developing novel disease-modifying treatments for e.g. Alzheimer’s disease, amyotrophic lateral sclerosis (ALS) and cerebral ischaemia (stroke).